In a field of 36 qualifying teams, The Chesterton Middle School Science Olympiad team placed second behind Thomas Jefferson, of Valparaiso, at the State Competition held at Indiana University, Bloomington, on Saturday, April 19.

The 17-member team took home medals in 11 of the 23 science and engineering events. Preparation for the event began in October with research on various science topics and construction of devices.

This year, the build events included making a balsa-wood glider with the goal of the longest flight, a balsa-wood bridge designed to hold the maximum weight, a Rube Goldberg device requiring a series of mechanical steps to ring a bell, and a car which needed to safely transport a raw egg cradled on the front end.

Taking a first place was the team of Ben Hoham and Jojo Arulondu in the Disease Detectives. The same duo received a third place medal in Anatomy.

The Green Team placed 2nd in the AAA schools division and 3rd overall earning an invitation to the State competition in March.

Many medals were awarded including…

Two teams, Maroon and White, represented CMS at the invitational. 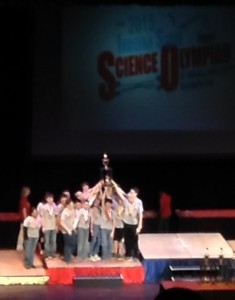 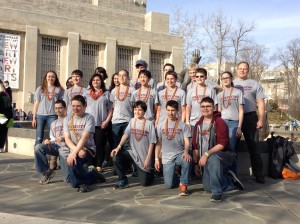 In a field of 30 qualifying schools, The Chesterton Science Olympiad team placed 2nd at the State Tournament this past Saturday, March 21st at Indiana University in Bloomington, Indiana.   Winning the event was Thomas Jefferson of Valparaiso.     Science Olympiad involves competition in 23 individual science and technology events that take place over the course of a day.  Some events involve building contraptions, such as a model bridge, glider, or car.   Other events focus on performing well in knowledge based tests, such as meteorology and solar system.   Winning Gold Medals were Matt Jewison and David Hamady in “Dynamic Planet” and Nolan Poczekay and Jason Hebblethwaite in “Crave the Wave.”   Nolan also placed third in “Road scholar” with partner Travis Biancardi and in “Solar System” with partner Ben Hoham.    Brandon Wong and Sawyer Castro placed second in the “Elastic Launch Gliders.” The pair also medaled with a 5th place finish in “Simple Machines.”     Receiving 4th place medals for Experimental Design were Ryan Day, David Hamady, and Jason Hebblthwaite.       Madison Ghoreishi and Ryan Day placed 5th in “Disease Detectives.”   Matt Jewison and Drake Joiner received 5th place medals in wheeled vehicle.

Coach  Theresa Keilman credits the success of the team to strong support from parents, community experts in science and engineering, and strong leadership from a returning group of team members.  “The 8th and 9th graders  were constantly pushing the less experienced members,” said Keilman. “They were willing to put in extremely long hours needed to perfect their individual events.  We knew we had to step up our game if we were going to be competitive at state, having placed 3rd at the regional event at IUN in February.”       In the final weeks students were working late into the evening on a regular basis.  Ryan Day, 9th grader, basically took over three floors of his parents’ home by having a bridge building station upstairs, a wheeled vehicle run spanning 12 meters on the main floor, and an air trajectory device in the basement.    The team had hoped to qualify for Nationals in Omaha Nebraska, but Indiana was only able to send the first place team this year, instead of two which was the case last year.  “Our team was still thrilled with its success.  Team member David Hammady said to me, ‘Being up there to receive a medal was amazing.   I mean, life-changing, really.’”